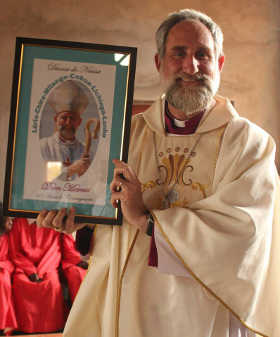 I believe that the Anglican Communion is a significant sign of God’s Kingdom to our world, and that we should do everything we can to maintain this witness

Bishop Klusmeyer has asked me to share a few thoughts on the recent decision of the Primates to sanction the Episcopal Church for “breaking with our common teaching on matters of same sex marriage”. My 32 years overseas, mostly in Africa, has opened my eyes to the wonderful diversity of the life we share in the Anglican Communion. Although views on the African continent (1 billion people, in 54 nations, speaking over 2,000 languages) are much more nuanced than some would have us believe, I think it is fair to say that the vast majority of African Anglicans are deeply troubled by both the innovations and the manner in which they have been adopted.

In this matter, Archbishop Justin has demonstrated creative leadership in his attempt to bring the family representatives (the Primates) back to the table for a conversation. They reportedly met in prayer despite the stringent atmosphere and made a serious effort to reach a common position. Although some might feel chastened, the results could have been much worse. For my part, I feel more disappointed at how so many, on both sides of this issue, instantly retreat into rival positions, spout defensive sound bites, and expect ‘the other’ to change. In truth there seems little possibility that we will all agree any time soon. Perhaps then, it would be more fruitful to look for ways in which we can best represent our Christian calling in the midst of disagreement rather than defend our respective position. Perhaps we all need to work harder at being citizens of the Kingdom of God.

I believe that the Anglican Communion is a significant sign of God’s Kingdom to our world, and that we should do everything we can to maintain this witness. When we lived in Mozambique among some of the poorest people in the world (3rd worst in the human development index), one of the things that brought us hope was the knowledge that we were part of something more, something bigger than our own reality. It encouraged us to think that even the voice of one of the poorest people in the world could be heard and respected because we belonged to the Anglican family. This willingness to listen deeply to one other, especially the stranger and the poor, to respect each other with equal regard, and in humility to acknowledge our own limited perspective, gives concrete evidence that God is truly at work among us. Although choosing to live in this vulnerable tension may go against conventional wisdom, it offers a message of hope that the world desperately needs.

It seems to me that adopting this attitude may be particularly difficult for us as Americans. We are a confident people, proud of our accomplishments and certain of our ways. We believe that our political, economic, and religious structures are the best and all others should and will follow. Indeed, there is much to admire, but not all. The call of God, through Jesus Christ, for us to live in a communion of communities challenges us to follow as well as lead, to be humble in spirit as well as confident in our position, to be weak so that others might be strong. When we live out these new covenantal attitudes in communion, we make visible the Good News of Jesus Christ to the world. Maybe this is the place we need to go? A place to ponder, not so much the issue of same sex marriage, but our willingness to take the risk of hearing the ‘other’ speak to us in this wonderfully diverse Anglican family that forms part of God’s great transformational work.

In the Peace of Christ,