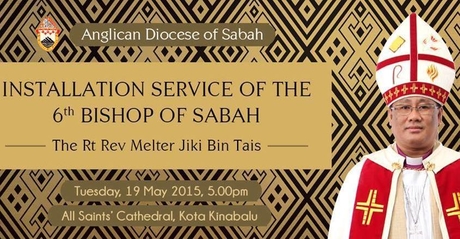 The Church of the Province of South East has no plans to ordain women to the priesthood and is firmly opposed to the innovation of same-sex marriage, the new Bishop of Sabah in North Borneo said.

The Church of the Province of South East has no plans to ordain women to the priesthood and is firmly opposed to the innovation of same-sex marriage, the new Bishop of Sabah in North Borneo told reporters last week. Speaking to reporters on 18 May 2015, the day before his installation as bishop, the Rt. Rev. Melter Jiki Tais said the issues that engaged Western Anglicans and Episcopalians had little resonance amongst the Christians of Borneo. Persecution and militant Islam, not gay bishops and blessings, was the presenting issue for his diocese. The first native Kadazan-Dusan (a Borneo tribal group) elected as diocesan bishop, Bishop Tais said Christians would not stop worshiping God in the face of militant Islam. “Malaysia is a country where we are free to choose our own religion and worship God according to our beliefs but when it comes to practising our faith, there is always an issue raised somewhere,” he said. The church would be asking the government to look into claims that radical Muslim Malay groups were forcing rural tribal people to convert to Islam. “There is no easy answer to it but we will look into this matter,” he told the press conference held at the diocesan office in Kota Kinabalu. In response to reporters’ questions the new bishop said: “We are totally against the so-called same-sex marriage. We will not allow it in the church.” Asked about women clergy, the bishop said “We are not ready for such a move. We are also not sure whether we will be open to the idea any time soon,” he said. The new bishop was born in Sabah and began his ministry as a parish worker in the diocese in 1988 and was subsequently ordained into priesthood in 1993. As a priest, he has served in various capacities throughout Sabah. He was collated as a Canon of All Saints’ Cathedral in 2006 and appointed as Archdeacon of the Central Archdeaconry in 2007. On 14 August 2009 he was elected suffragan bishop of the diocese and appointed diocesan bishop earlier this year in succession to the late Bishop Albert Vu. The sixth bishop of Sabah, he is the first native of the diocese appointed to the post — his predecessors having been Chinese.