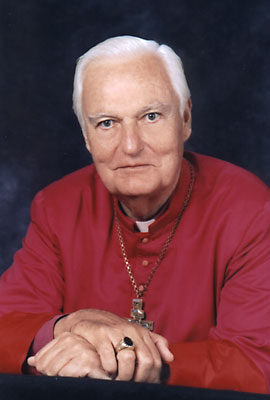 Archbishop Robert Morse of the Anglican Province of Christ the King died on 28 May 2015.

The founding archbishop of the Anglican Province of Christ the King, the Most Rev. Robert Morse, has died. On 28 May 2015 the province released a letter reporting on his passing earler that day. Below is the late archbishop’s official biography from the province’s website and the letter announcing his death.

The Most Reverend Robert Sherwood Morse was born April 10, 1924, in San Francisco, California, to Carl Lambert Morse and Estelle Scott Morse. Archbishop Morse grew up in nearby Burlingame, graduating from Burlingame High School.

As a young boy, he often went with his father, Carl, to Lick Observatory on Mt. Hamilton to talk with the astronomers. Carl had been raised in that community of astronomers. They gave Archbishop Morse a sense of the infinity of space that helped lead to his interest in God and eternity. He had also always been interested in history and said that he backed into theology through history trying to understand why mankind was so mixed up.

In 1942 he enlisted in the U.S. Army and served in the Infantry Signal Corps until his discharge in 1945. He received his B.A. from Pacific College (now University of the Pacific), Stockton, California, in 1948, where he excelled in intercollegiate forensics. He graduated from Seabury-Western Theological Seminary in Illinois in 1950.

Archbishop Morse was ordained a deacon July 8, 1950, and a priest on February 22, 1951. From 1950 to 1952 he served as an assistant at St. Paul’s Episcopal Church in Burlingame, California. In 1951 he established St. Elizabeth’s Church in South San Francisco and was its Vicar until 1957. He also established the Episcopal Chaplaincy at Stanford University in 1952. And in 1954, he established St. Edmund’s Episcopal Church in Pacifica, California. In 1957 he moved to Berkeley and established the Episcopal Chaplaincy at the University of California at Berkeley, working there from 1957 to 1961. In 1962 he co-founded York School in Monterey, California, at that time an Episcopal college preparatory school for boys, and was Assistant Headmaster from 1961 to 1965. In 1966 he was called to be Rector of St. Peter’s Church in Oakland, California, where he served until 1984.

In 1977 six former Episcopal parishes including St. Peter’s, Oakland, California, joined together and elected as their Bishop then Rev. Robert S. Morse, Rector of Saint Peter’s. On January 28, 1978, in Denver, Colorado, Father Morse was consecrated Bishop of the Diocese of Christ the King. The Rt. Rev. Albert A Chambers, retired Episcopal Bishop of Springfield, Illinois, was chief consecrator who acted to preserve the apostolic succession and the American Episcopate. When the Diocese expanded it was reorganized into four dioceses as the Anglican Province of Christ the King and Bishop Morse was elected Archbishop of the Province.

Archbishop Morse retired as Archbishop of the Province on January 25, 2008. He continues as Provost of St. Joseph of Arimathea Anglican Theological Seminary which he founded in 1979.

In 1957, Archbishop Morse married the former Nancy Burkett at St. Mary the Virgin Church in San Francisco with Bishop Carl m. Block officiating. They have two children, Nina and John, and nine grandchildren.